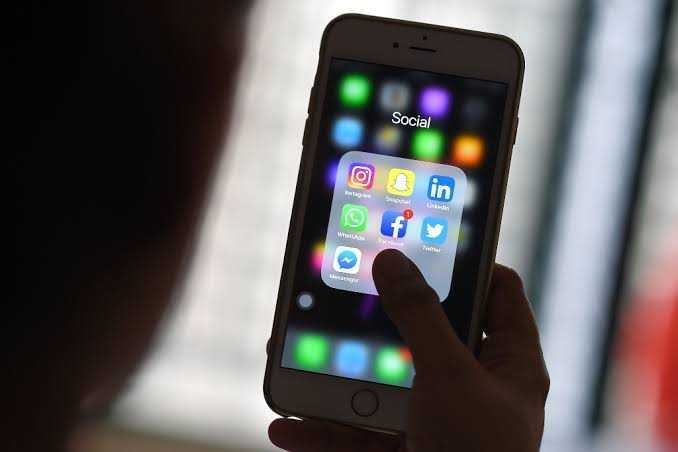 Secret codes and language used by kids and traffickers. 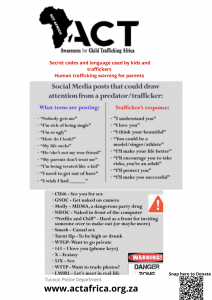 “Educate yourself, if you as a parent don’t know anything about social media it’s going to be hard for you to find those things that you need to look for that could be a potential danger sign” 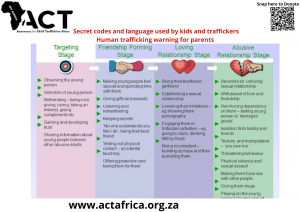 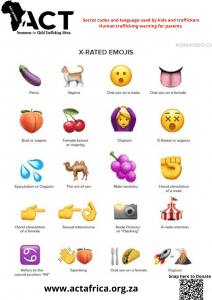 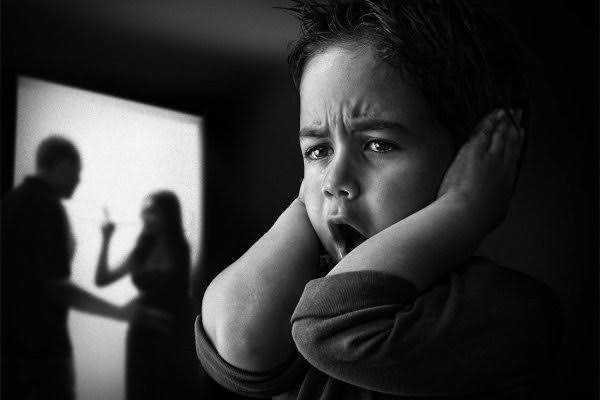 Gender Based Violence Prevention Is Better Than Cure

•    Never takes responsibility and accountability for their abusive behaviour and externalizes the causes of their behaviour.  They shift the blame of their violence on circumstances such as stress, their partner’s attitude/behaviour, substance abuse and even that they having a bad day. Whatever so-called loophole they can find to blame-shift, they will use.
•    They will be pleasant and charming between periods of violence and to the outside world is a seemingly very nice person, upstanding and even helpful and often the life of the party. They often hide behind religion and come across as respected individuals to the outside but are actually devils in disguise. •    Objectifies the victim, displays unnatural possessiveness and often sees them as their property or sexual objects.
•    Has low self-esteem, feels powerless and ineffective in the world. Come across as being successful and could very well be financially but in reality, they feel inadequate even if they have attained this success.
•    Often minimizes the seriousness of the violence and the effect on the victim and other family members, as well as often denies that it happened.

WARNING SIGNS OF AN ABUSER

•    Extreme jealousy
•    Possessiveness
•    Unpredictability
•    A bad temper
•    Cruelty to animals
•    Verbal abuse
•    Extremely controlling behaviour
•    Antiquated beliefs about the roles of women and men in relationships
•    Forced sex or disregard of their partner’s unwillingness to have sex
•    Sabotage of birth control methods or refusal to honour agreed-upon methods
•    Blaming the victim for anything bad that happens
•    Sabotage or obstruction of the victim’s ability to work or attend school
•    Controls all the finances
•    Abuse of other family members, children and or pets
•    Accusations of the victim flirting with others or having an affair
•    Control of what the victim wears and how they act
•    Demeaning the victim either privately or publicly
•    Embarrassment or humiliation of the victim in front of others
•    Harassment of the victim at work

Abusers are deliberately charming, attentive, and sweet at the beginning of a relationship. They will do whatever is needed to make you feel so appreciated and loved that you won’t even notice he is controlling you and sometimes it’s too late. However, there are warning signs to help detect an abusive relationship before it is too late.

1. Use Charm and Romance as a distraction.

Buy you flowers, gifts, take you on holidays basically they will try to please your every desire and likely to be the most romantic person you have ever met. Pays attention to you and make you feel special and wanted to the point that you may start thinking that he is too good to be true and when that thought arises take heed because it is. Trust is an important factor they work on as they need you to do so and to develop strong feelings as it makes it easier to control someone who loves you. In essence, they will do what it takes to distract you from their negative behaviours such as control and jealousy in the beginning.

Uses lines that “it’s love at first sight”, you are made for each other and can’t imagine his/her life without you. Will charm the socks off you, say you are the love of his/her life and never loved someone as they love you. Often, they insist on being exclusive right from the onset and push to move in together or even get married as soon as possible. This is all to make you his/her possession as this makes them feel like they have power and in control. When you feel rushed which more than likely you will feel, don’t brush it aside and take your time and him/her must respect that. Abusers often don’t and their true colours often sneak out a bit at this stage as they now feel that they not in control and powerless.

Glare at other men/women for looking at you and even verbally and sometimes physically be abusive to whoever may be looking at you. I Will question you about your friends constantly. This jealousy may seem cute or even loving at first but soon their true colours will come out and make you feel guilty for spending time with friends and or family. They will text you several times a day and may accuse you of flirting or cheating especially if you do not respond when they expecting you to. If you do challenge this, they use the excuse to detract from their negative behaviour that he/she loves you so much, can’t stand the thought of anyone else being near you to the point that they will say to you that no one else will be with or near you and that they will not allow it. This is the beginning of isolation and it is not loving, it is an obsession. I share a personal experience of obsession and possessiveness – a guy pursuing me for a period of time eventually threatened to shoot me if I did not date him as he said if he can’t have me, nobody else will.

This is to usurp you of your power and control over your life. Get’s angry if you don’t call him/her back right away or come home late and uses the excuse it’s because he/she worries about you. Wants complete detail of who you saw, where you went, what you were doing and even what your conversation was about. It will get to the point where you will not be allowed to make decisions to the extent even you will have to get an approval over everything including of who you spend time with and where you go. This is all guided as so-called care, love and have the audacity to say it’s because they know what’s best for you.

A sweet, loving person who everyone else sees and who you fell in love with and the other side of his/her persona who puts you down, makes you feel guilty and isolates you. Makes you believe that if you did things differently, loved more and or treated him/her better, he/she would be that sweet, loving person all the time. So this manipulation and mind games are used to make you feel guilty and keep you where they want you and you end up staying because you hope the person you love will change for the better but instead you will spend most of your time being controlled by the person who hurts you. Eventually, you won’t be able to tell the difference.

Like I mentioned before, never takes responsibility and accountability. It is always someone else’s fault, whether it’s for a bad day, work problems, being obtuse and rude and someone is out to get him/her especially in the workplace when things are not in their favour. Blame-shifting is the speciality if the person is upset, unhappy, feeling unfulfilled and will blame you for his/her negative feelings and actions as he/she expects you to fill those voids in their life.  Often the abuser will apologize for yelling, putting you down and or physically hurting you and it may even seem genuine but will always find a way to deflect from themselves and even make it your fault where you may start believing it is. The abuser will give you reasons using their so-called love for you as an excuse and often say it’s because him/ her loves you so much and or you drive him/her crazy. Take heed of these warning signs which is not exhaustive but sure are red flags. The first sign of these, get out. Please note, you cannot and it is not your responsibility to change anyone and you in denial if you choose to continue living in that hope which is self-destructive and could end up in you being maimed or murdered. The abuser will only change if they want to and takes responsibility and accountability for their abusive behaviour. You have a responsibility and accountability for yourself to protect yourself and to not enable this abusive behaviour by remaining in denial and staying in an abusive situation. Should you wish to donate, please click on the link below https://www.payfast.co.za/donate/go/awarenessforchildtraffickingafricaactafrica (edited) Written & Compiled by Hilary Leong and Matthew Mensah 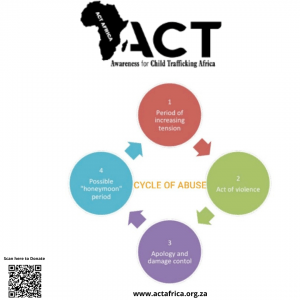